Shortly after leaving the Royal Ballet, Cindy was cast as the leading lady in the award-winning independent feature film, Love Tomorrow. The film tells the story of a chance encounter between two dancers whose lives are about to change dramatically over the course of 24 hours. It premiered on the 4th of October 2012, at the 20th Raindance Film Festival in London, where it won the award for Best UK Feature.

The film was also a finalist at BIFA 2012, and a Special Jury Prize Winner at the Fort Lauderdale international film festival in Florida. Love Tomorrow was released in cinemas throughout the UK in December 2013 by Soda Pictures and reviewed as a vibrant tale of the redemptive power of friendship, love and dance.

It is written and directed by Christopher Payne, produced by Stephanie Moon and co-produced by the legendary godfather of motion capture Andy Serkys & Emmy Award winning film-makers and choreographers, the Balletboyz. 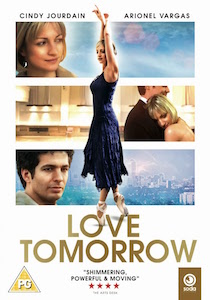